Skip to content
Home » Interviews » President Obama: I have your back “PRETTY BROWN GIRLS HAVE YOUR BACK!”

— A budding T-shirt brand delivers a simple, yet powerful message — 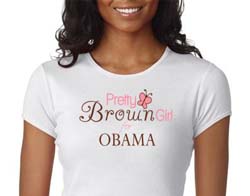 Nationwide (BlackNews.com) — The Pretty Brown Girl (PBG) brand has been sparking excitement across the country for the last year. Founded by Sheri Crawley, a Detroit mother of two little girls, Pretty Brown Girl’s sole mission is to encourage girls to celebrate the skin they are in by celebrating the beautiful shades of brown skin all over the world; while inspiring positive self-esteem and confidence.

“As a small business owner and a woman of color who supports the values and vision of our President, I was compelled to use my platform to voice our support,” says Crawley. On Thursday, after the President spoke at the Democratic National Convention, Crawley was so moved that she designed the “Pretty Brown Girl for Obama” T-shirt. The response was immediate and overwhelming for the company as the phones are ringing off the hook with calls from church groups, women’s organizations and families ordering the stylish T-shirts that support President Barack Obama.

She adds, “Our signature apparel is very popular among girls and women alike, but this particular T-shirt sends such a simple yet powerful message relevant to this very important election.”

The company will showcase the official “Pretty Brown Girl for Obama” T-shirts at the 42nd Black Congressional Black Caucus Legislative Conference that is being held from September 19-22, 2012 at the Walter E. Washington Convention Center in Washington, DC, where they will participate as an exhibitor. The “Pretty Brown Girl for Obama” T-shirts can also be purchased online at www.prettybrowngirl.com.

“Pretty Brown Girl” is quickly becoming a popular term of endearment for girls and women to describe themselves and others. More than products, Pretty Brown Girl is a movement. The company has a curriculum, programs and a Student Ambassador Program which enables high school and college teens to become liaisons with their school, church, or community to facilitate Pretty Brown Girl projects and events while developing leadership skills.

Crawley’s mission is to become the voice of brown girls in cities around the U.S, and hopes to also reach girls all over the world.

More information on the company and products can be found at www.prettybrowngirl.com.